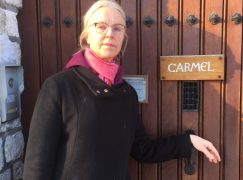 The Swedish mezzo is flying home from Australia after the sudden death of her husband, the distinguished Swedish theatre director, Benny Fredriksson.

Benny died on Saturday, aged 58. The couple, who had been married since 1989, had spent time together with other members of the family in New Zealand ahead of concert performances in Sydney and Adelaide.

Benny Fredriksson was head of the Stockholm state theatre for 16 years until his resignation at the end of last year after press criticism of his attitudes at work. His death on Saturday was announced by the theatre.

A statement has been issued on behalf of Ms von Otter: ‘The family is crushed by the loss of their beloved husband, father and grandfather and asks for their privacy to be respected.’

Our thoughts are with them.

UPDATE: Theatre says it was suicide.

How many cops does it take to stop a piano? »