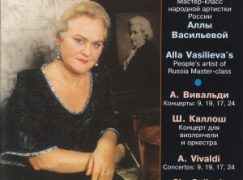 Mstislav Rostropovich was 19 when he gave cello lessons to a girl from his high school class, Alla Vasilieva.

She went on to work as his assistant at the Moscow Conservatoire.

He entered her for the inaugural Tchaikovsky Competition but she withdrew, condemning the ‘musical marathon’ aspects of public contests.

She had a good solo career, mostly in the Soviet Union, working with such conductors as Rudolph Barshay, Yuri Ahronovich, Yuri Simonov and Pavel Kogan.

She mostly taught at the Moscow State University, named after Maimonides.

Alla died in Moscow at the weekend, aged 84.