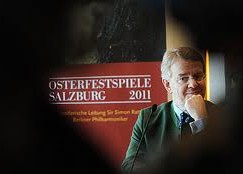 Stats are out for the festival, Peter Alward’s last as manager, and the indicators are all pointing upwards.

Alward, a former EMI Classics boss, was brought in by a panicked Eliette von Karajan and Simon Rattle after the previous festival boss was run out of town on charges of fraud that have never come to trial.

Rattle and the Berlin Phil defected soon after to Baden-Baden in a major moral and commercial error. Alward brought in Christian Thielemann and the Dresden Staatskapelle to replace them.

The results speak for themselves. Against 75% for some Rattle/Berlin productions, the Easter festival has become a hot ticket once more and Peter Alward can toddle off to his Schloss, job well done. 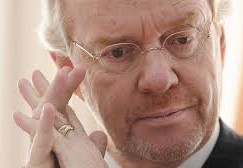 In the press release(below), Thielemann fails to offer a word of thanks.

The Staatskapelle Dresden and Christian Thielemann, the artistic team in residence at the Salzburg Easter Festival, conclude their third season on 6 April 2015 with the opera performances Cavalleria rusticana and Pagliacci. This year’s Festival has been both artistically and economically extraordinarily successful.

The new productions of Pietro Mascagni’s Cavalleria rusticana and Ruggero Leoncavallo’s Pagliacci directed by Philipp Stölzl and conducted by Christian Thielemann were acclaimed by both audiences and critics alike as highly convincing and impressive. Jonas Kaufmann, who led a starry international cast of soloists, achieved huge success in his role debuts as Turiddu and Canio.

Earnings from ticket sales increased by 14.4 percent compared to last year, which represents a new record income of 3.4 million Euro. This outstanding development contributes considerably to the fact that the Easter Festival continues to achieve an extremely high self-financing ratio of 88 percent.

18,900 tickets (last year: 16,400) were sold for the 2015 Salzburg Easter Festival and the overall seat occupancy factor was 94.2 percent (last year: 88 percent). This percentage has not been achieved since 2002. The opera performances, the Choral Concerts and the Concert for Salzburg were completely sold out. The number of patrons rose by 17 percent compared to last year, meaning an increase of 300 members with a total of 2,100.

The international media interest in the Salzburg Easter Festival remains on a high level: 114 journalists from 13 nations filed reviews about the festival.

This season ist the last for which Peter Alward and Bernd Gaubinger take responsibility as managing directors.

Peter Alward, Managing Director and Intendant, says: „Both the artists and the artistic administration of the Festival are particularly gratified by this year’s success. We are also very proud of the fact that, following some turbulent times, the Festival is now moving in calmer waters and that artistic matters now stand in the forefront. It is a particular source of joy that the Staatskapelle Dresden and Christian Thielemann have positioned themselves so convincingly as our new artistic leaders.”

Bernd Gaubinger, Managing Director, points out: “We were expecting an increase in ticket demand for the 2015 festival, but this excellent result has clearly exceeded our expectations. This success impressively confirms the fact that the Salzburg Easter Festival is travelling in the right direction. We feel justified in stating that we are handing over a commercially secure and successful festival. We would like to thank all those who have supported us on this journey in the last six years and wish both the Easter Festival and Prof. Peter Ruzicka continued success in the future.”

Christian Thielemann, Artistic Director of the Festival and Principal Conductor of the Staatskapelle Dresden, says: ”The last days have given me particular happiness. The Staatskapelle has managed to establish itself firmly in the last years in the hearts of our festival audiences. The reactions that every concert seems to inspire are simply overwhelming. Salzburg has become a second home for us and I am already looking forward to the coming years. I would like to express our thanks both to all the artists and to all the staff of the Festival without whom this would not be possible.”

« How Martha Argerich gets herself on stage (will she, won’t she?)