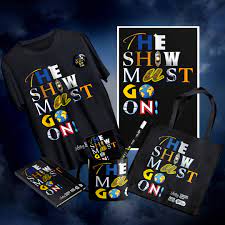 During the pandemic, everybody in the theatre and everybody who loved and missed the theatre, had something with this logo on it – a t-shirt, a notebook, a tote bag, a badge, a mug, a phone cover. I had a mask. The Show Must Go On became our mantra, our article of faith that the show would, in fact, go on when this awful time was over.

I became obsessed with the fact that, despite the theatres, the concert halls, the performance venues on both sides of the Atlantic being closed, and despite the fact that neither government even tried to help the thousands of performers and theatre workers who were precipitously thrown out of work, the performers themselves came through for one another in many different grassroots ways. One such is the Theatre Support Fund, just one of many small organisations who came together spontaneously to help their colleagues in need.

Crowning Glory is a new song which has been recorded by a team of musical theatre professionals to support performers devastated by Covid. Recorded in the style of Do They Know It’s Christmas? with many featured soloists, Crowning Glory is not just relatable to anyone who dedicates themselves to the craft of performing but to all of us who have had to live through the challenges of the last two years and who continue to strive in spite of obstacles in our personal and professional lives.

« Opera of the week tonight – The most German of German operas