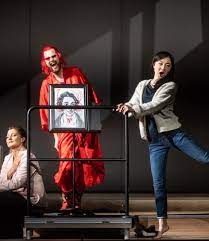 Opera of the week tonight – The most German of German operas

Wagner said that Carl Maria von Weber’s early-Romantic gem was the most German of German operas.  With touches of the eerie supernatural, Der Freischütz is an irresistible mix of colourful folklore, tender romance, and a passionate struggle between good and evil – all captured in Weber’s tuneful and dramatic score. Successful Russian theatre, opera and film director Kirill Serebrennikov makes his debut in Amsterdam. In his approach to the opera, the struggle for success is transposed from the world of hunters to that of artists. German tenor Benjamin Bruns and South African soprano Johanni van Oostrum are opera’s young amorous couple with Patrick Hahn conducting the distinguished Royal Concertgebouw Orchestra.

The Plot:  Max, a young hunter, must win a shooting competition to claim the hand of his beloved Agathe. But on the eve of the competition, seemingly having lost all shooting prowess, Max allows himself to be convinced by his rival Kaspar to make a pact with the devil to use seven magic bullets which never miss their target.