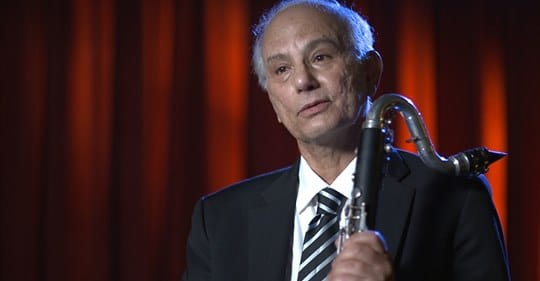 Hailing from Warren, Ohio, Jim served four years as a member of the United States Marine Band and White House Orchestra in Washington, DC, before arriving at the Met.

Met clarinet Jessica Phillips writes: For 18 years I sat next to this humble, hilarious, incredible person. We saw each other through many ups and downs over the years, always with respect and a LOT of laughter. My first year in the orchestra, I often got in trouble for laughing at Jim’s dry, often self-deprecating witticisms. Jim had the most amazing sound on the bass clarinet. Even though he liked to say “playing bass clarinet is basically hours of boredom followed by 3 minutes of sheer terror”, he never ceased to amaze his colleagues across the orchestra with his musicianship. Even audience members knew he was a rockstar, especially during the Ring Cycle. Once, in having to end the rehearsal before finishing the Clemenza di Tito basset clarinet aria (for which Jim had already waited two hours to play), the conductor asked Jim “Are you ok?” and Jim instantly quipped “I make a living,” to which the entire orchestra roared in laughter, including the conductor. Even with his humor, Jim’s seriousness about bringing his absolute best each and every night, no matter what was going on, is one of the things I truly respected and loved about him. He was the consummate professional. My heart is so heavy that we have lost this gentle giant of the bass clarinet. He will be missed dearly. Words really cannot do him full justice, so for now, we hold him and his family in our hearts, and toast him on his way…