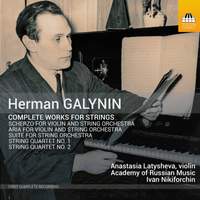 He threw a chair for Shostakovich

Toccata have an album coming out of music by Herman Galynin:

Galynin (1922–66) was one of the brightest hopes of Russian music, admired by his teachers Shostakovich and Myaskovsky. His early, student compositions brought him swift fame, but a mental collapse confined him to an asylum. Even if the extraordinarily high voltage of his early music isn’t quite maintained in his later works, they still show both fire and finesse. Seen as a whole, the wild, freewheeling energy of his compositions – as witness these five works for strings – leave little doubt that he could have been one of the major musical voices of the second half of the twentieth century; as it is, what he did achieve is remarkable. Yuri Abdokov’s extensive booklet notes are informed by the memories of his own teachers, Boris Tchaikovsky and Nikolai Peyko, who were friends of Galynin’s from boyhood, after he had been rescued from his early life as an orphaned street urchin. Abdokov quotes Rudolf Barshai’s memoirs: ‘Once in the cold, without putting on a coat and hat, he went to Gorky Street, entered the Central Telegraph building, looked around and shouted loudly: “Stalin and Zhdanov are murderers!” He was seized, of course, and then put into a madhouse’. Abdokov mentions another such occasion, at a Party meeting, where the chairman had vilified Shostakovich. Galynin’s response was to defend his teacher – but not with words: he grabbed a chair and rushed at the chairman, before being forcibly restrained. His music is characterised by the same impulsiveness…

« Tributes pour in for Erich Gruenberg

The Slipped Disc daily comfort zone (147): …. and what Schnittke made of unfinished Mahler »