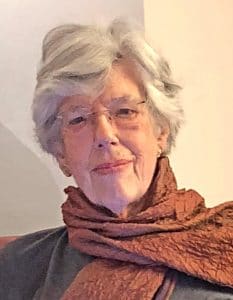 The Boston-based medievalist Virginia Newes has died of cancer.

A professor emeritus at Eastman, she taught western art music, 800-1750. In retirement she reviewed concerts for the Boston Musical Intelligencer.

Virginia Ervin was born on August 5, 1929, in Bala, Pennsylvania. She attended Radcliffe, got a master’s in Musicology in Brussels, and in 1987 earned a doctorate from Brandeis University. She met her husband, Klaus Newes, on a transatlantic trip. They had three children, but her younger son was killed in the crash of a private plane in which she was severely injured. Her husband Klaus died in 1974 at the age of 50. Her son Christian and daughter Gabriella Newes-Adeyi survive her. Her daughter Gabriella noted, “My mother had a zest for life and found beauty in the world and people around her. She had a deep intellect and passion not only for music, but also for continued learning in art, philosophy, literature, and more. She became more politically active in her last years, supporting several progressive causes. As I am reminded with notes and calls in the past days, she had many, many friends from all over. It is a great comfort to know how loved she was and the joy she brought to others.”