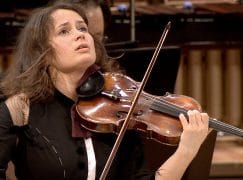 Exclusive: Inside the complex whirl of Patricia Kopatchinskaja

I saw Patricia Kopatchinskaja live for the first time two years ago, when she played the Sibelius with Konzerthaus Orchestra in Berlin. I was, of course, familiar with her work, and eager to get a taste of the living, breathing PatKop. She is beloved by audiences and musicians, but she (like many strong personalities in all fields) also elicits a passionate negative response by a vocal minority. I was looking forward to working with her – to see what she is like in rehearsal, in real life.

My own reactions to her Sibelius in Berlin were mixed. In the end, she had my support, even though many of her musical decisions were diametrically opposed to my instincts and training. She was so quirky, and her mannerisms so jagged, I wondered to myself if she was being true to herself, and true to us.

And so – to give the week’s work at the Saint Paul Chamber Orchestra my best foot forward, I decided to try to understand her by studying her background, and her influences. We all, as musicians, see and feel our music through different lenses – our childhood soundscapes, our teachers, the music that our parents played in the car. What did she grow up to? If I could understand her perspective, I think I could more easily hop on the PatKop bus. The week before, we had worked with early music specialist Richard Egarr, who grew up on 50’s crooners. I downloaded a bunch of Rosemary Clooney that week – and loved the way he opened up the Locke and Purcell to a kind-of singalong friendliness. Now – to understand Patricia.

She was born in Chisinau, in the Moldavian Soviet Socialist Republic (now Moldova). Her parents are musicians, they played in the State Folk Ensemble of Moldova – dad is a cimbalom player and mom is a violinist – and she grew up with her grandparents while her parents were on tour in the former Eastern Bloc. She began to play at age 6, and moving to Vienna at age 12, she later studied composition and violin at University in Vienna and Bern. Patricia herself is classically trained, but those sounds she creates – those are not sounds from the classical world – those are from somewhere else.
I first listened to her 2010 album, Rapsodia, which is thick with fantasy and the music of her native land. It is a family album – mom and dad play throughout – and sounds of birds, nature, human cries and sighs burst through my speakers. Rhythms and tempi are foot-stomping and slide forward, come to abrupt halts. Patricia doesn’t believe that music has to be beautiful – perhaps this is one of the things that makes her controversial – she seems to believe that music is a representation of the realities of life – from fantasy to brutality. And so it challenges us, offends us, then caresses us.

Next I watched several YouTube videos with her duo partner Mihaela Ursuleasa (who is also on Rapsodia). She and Patricia had a magical musical synergy – both were wild girls – young mothers – fearless in their spontaneity and exploration. They broke through so many barriers together, and seemed to laugh and twirl with an abandon rarely seen. When, in 2012, Ursuleasa was found dead in her apartment in Vienna, of a brain aneurysm at age 33, leaving behind a young daughter, it was unclear how Patricia would be able to continue. They were of the same cloth. Here is an excerpt from Patricia, written a few days after Mihaela died.

It is said that friendship is one soul in two bodies. We were like sisters. In all directions of life and during every astonishing ramification of our fates we were for many years ear, heart and inspiration to each other. And in need I could always count on your unselfish and generous support. Your sound, your refinement, your aura, your awesome presence, your tenderness, your freedom without any mannerisms, your poetry and intelligent phrasing will always shine in my memory. I always felt that you are a wild cat at the piano, a real wonder when we played together. You knew when I breathed, you knew every inch of my bow, I still see your hands and know exactly when they will touch the keys. Our tears when we first played Enescus third sonata, the silence thereafter which said so much, – we shared the same homeland. Thank you for having lived your life with us and for having given us so many magical moments. It is said that friendship is one soul in two bodies. From now on I will miss a part of my soul forever. 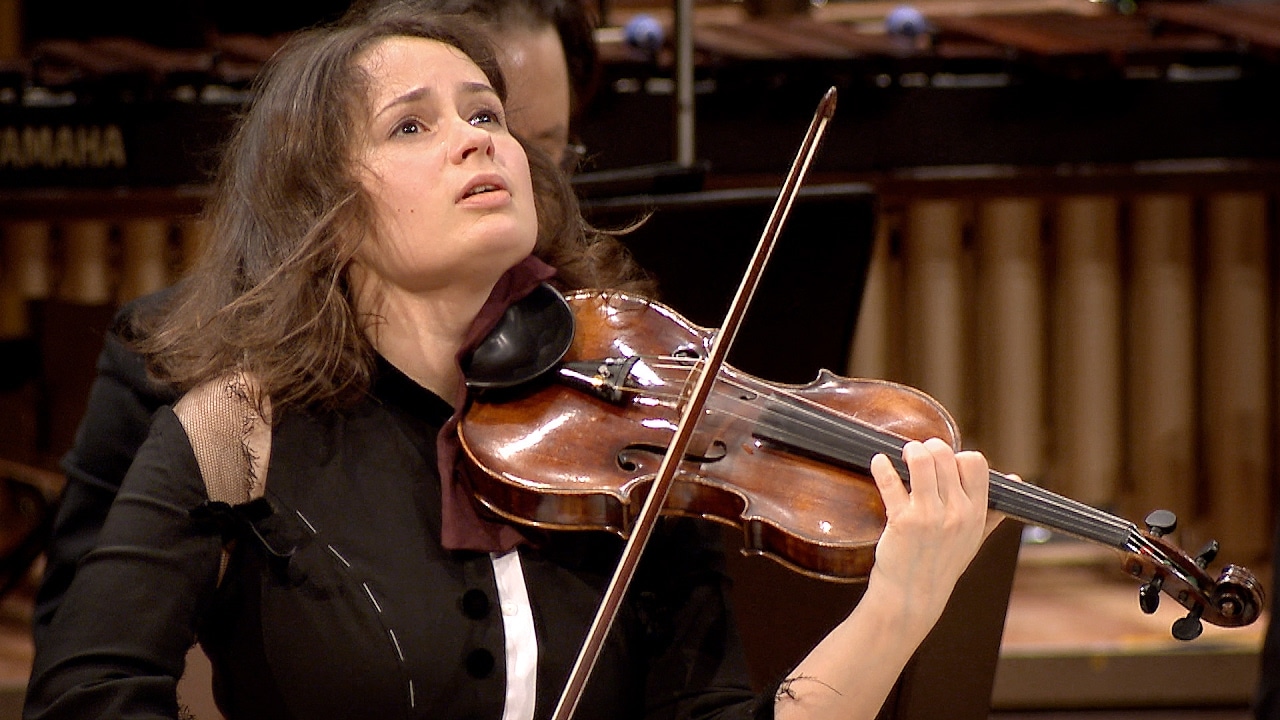 Patricia herself is only 41 – she has a 13 year old daughter, and a Swiss husband who is 77 – a retired neurologist. They live in Bern, and her husband cares for their daughter while Patricia is (increasing) away on tour. This, in some way, helped me to understand her better. Her husband is a noted author, and looks like a wise patrician. I imagine their conversations are complex, serious – and that she must have, even in her 20’s, been able to hold her own with her older husband and the world that they inhabit. She has a strength of character about her – a calmness and timelessness – a universal perspective. We spoke about her daughter and husband – she would often come to the orchestra green room to chat. She explained how, that morning, she had been FaceTiming with her daughter, a talented painter, and had seen the work-in-progress – a self-portrait. It showed half a head, the back disintegrated into the imaginary world and jumble of thoughts and images tumbling out which were the inner part of herself. Patricia chuckled and said “that is soooo my daughter!”

I can tell you, right now, that she is absolutely authentic. She is passionate, detailed, spontaneous and informed historically. Her technique is beyond reproach – left and right hands which can and do everything. This kind of technique can only be had by extremely disciplined and consistent work, starting from a young age. Lots and lots of work, and sacrifice. It is so natural, flawless, and like her daughter’s painting, you can see the imaginary world flow out of her. She reads letters from Robert and Clara to the orchestra, Robert’s doctor’s diagnosis, reports from the World Climate talks, we sing our parts, she talks about the multiple meanings of farewell – her farewell from her 3 year tenure with the SPCO, Robert’s farewell to Clara, humanities’ farewell to the the planet. As she is rehearsing, she spontaneously adds fermatas, cadenzas and solos, dramatic timings and intangible dynamics. And this is with Haydn. She seems to blatantly ignore, disregard, or discount the structure of a piece, the lengths of phrases and what we consider to be normal dynamic parameters. But it works – it really helped me to be able to be with her for the entire process. I could see how she thought. How her mind would wander to a color which is so far removed from what would be considered acceptable in any musical circles I am aware of, but it was always true to her vision, her imagining of what the music was saying to her. It was strong and clear. Easily the clearest musical vision I have ever witnessed.

She is a hard worker. She would always be coming to the orchestra room to check a detail with someone – she knows everyone by name. We had an intonation sectional in her room – just the 4 firsts and her – which ended only 6 minutes before the concert started (with the impossibly difficult Mendelssohn Double concerto, which she and her partner Polina Leschenko, played stunningly). She was never done working, imagining. She asked about my life, my next steps, and offered these words, “you will find your path – you must never play a note if your heart is not sure….”

I have witnessed a true musical genius. If you, like me, had or have viewed her with skepticism at some point, listen to these recordings. Listen to her parents. Remove expectations, wipe away your experiences and training, and you, too, might be able to enter her surreal, fragile and powerful world. 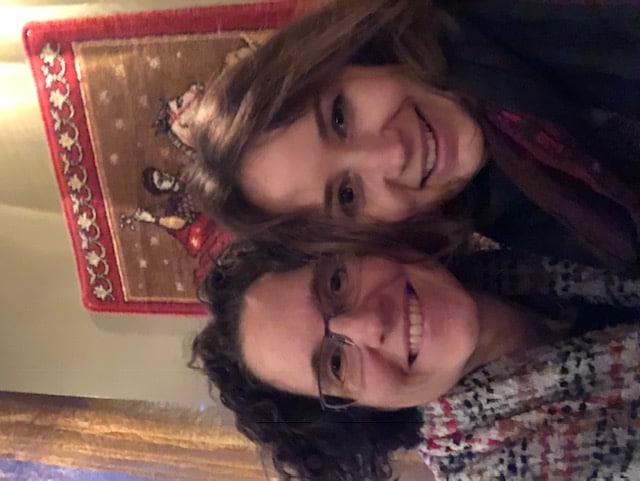 An English music teacher is up for $1 million world prize »