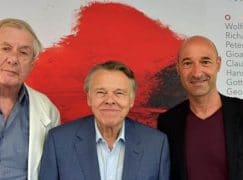 Mariss makes friends with the rat-man

Many conductors have reservations about the radical director Hans Neuenfels, whose production of Tchaikovsky’s The Queen of Spades opens at Salzburg on Sunday. Neuenfels, renowned for his Bayreuth production where the chorus were dressed as rats, said yesterday that ‘it is very rare and almost bizarre for conductor and director to form a close-knit unit’.

Mariss Jansons is an exception.

Neuenfels (l.) said: ‘I have rarely felt that conductor and director could communicate so well.’

Jansons, calling the production ‘delightful’, added: ‘It is immensely joyful to be working at the Salzburg Festival with a first-rate orchestra such as the Vienna Philharmonic, a wonderful ensemble of singers and an outstanding director – I feel as if I’m in paradise.’