An orchestra turns gay-hate mail into a cantata of hope

From the Helsingborg Symphony Orchestra in Sweden:

During the spring, a letter arrived at Helsingborg Concert Hall. The letter referred to a Helsingborg Symphony Orchestra concert in which music by homosexual and bisexual composers was performed. The anonymous writer accused the HSO of ‘hopping aboard the fag train’. In response to this criticism, the HSO will perform a newly written cantata Bögtåget (The Fag Train).

The anonymous writer states that, ‘like many others’, she/he will not be visiting our concert hall again. The HSO, led by Fredrik Österling and tenor soloist Rickard Söderberg (pictured), is using the text of this letter in the cantata on May 26. 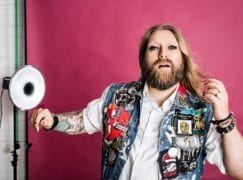 Österling, says: ‘As an artistic institution, we naturally actively relate to our surroundings and events going on around us. The hate letter I received reeked of contempt and fear for the love between human beings. I had no hesitation when Rickard Söderberg suggested that I should set it to music. By considering the text as an opera libretto, we were able to scrutinise the emotions that the anonymous sender was seeking to express. And at the same time, we are doing exactly what an artistic institution should be doing; we are reflecting our times in our art.’

« And the winner of the big Birgit box is….