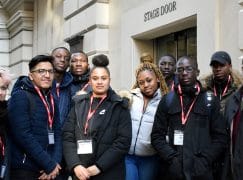 You can watch the outcome here if you’re in the UK, or read about it here anywhere else in the world.

Mike writes: ‘Cultural exploration isn’t just about a teenager from the inner city becoming an opera buff or that opera or theatre per se ‘improves’ him or her as an individual (although it will enrich them). It is time, I believe, to focus not on developing audiences in a one-dimensional way, but that we should focus on social and personal aspiration by using our extraordinary art forms as demonstrations of the capacity people have to look beyond their immediate horizons.

‘I’ve been a little taken aback by some reaction to the concept. I am asked why ‘Hip Hop’ is used in the title, as though we are using it as a euphemism for the colour of the majority of our participants. Hip hop is the cultural reference point for all of them; they chose the title for the film.’

WARNING: You may be moved.

« A second maestro is smashed up in road accident