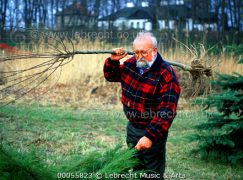 The Polish composer Krzysztof Penderecki, 84, has informed the Vienna State Opera that he ‘will not be able to complete the composition of Phaedra as discussed between us. Over the previous year I have tried and tried again to work on the conception of the opera but in recent times, adverse circumstances […] have left me with no other choice but to request to be released from our contract. This has been an incredibly difficult decision and all the more, given that such a proposition from such a prestigious and prolific house as yours depends on a deep relationship of trust from both parties. From the very beginning to this very moment, you have trusted in me.’

Dominique Meyer, replacing Penderecki’s work with Manfred Trojahn’s Orest, says: ‘It is an awful pity that Krzysztof Penderecki’s composition project, which we had many productive exchanges about over the last six years, can no longer be brought to fruition. I am, however, thankful that Mr Penderecki was able to act promptly so we had time to alter the programme … The Intendant’s fear that a piece will not be ready in time for the deadline is something that has not changed since the Baroque period. The risk that it might not perhaps all come together at the end is one that we have to take in order to facilitate the creation of new works. And so I am looking at the positives, namely that two further large-scale world premières and two children’s opera commissions are running according to plan.’

Christa Ludwig is going to be 90 »