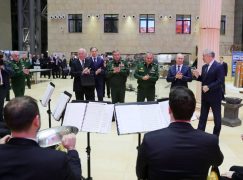 Munich is up in arms today – literally – at a report on the Kremlin website that Valery Gergiev took part this week in a show of strength by President Putin and the Russian military.

The Abendzeitung reporter, Robert Braunmüller, spotted this paragraph in a Kremlin report on Putin’s assessment of the Syrian conflict and the future military options.

In this part of the exhibit the President was met by Valery Gergiev who conducted the symphony orchestra concert in Palmyra after its liberation. The President and the Maestro had a brief conversation and then listened to a piece from the Preobrazhensky Regiment March – it was played by Mariinsky Theatre musicians invited to the exhibition.

Gergiev is music director of the city orchestra, the Munich Philharmonic. It was leaked at the weekend that Gergiev’s Munich contract is to be renewed until 2025.

But the has still to be approved by the city council in February 21, and that may not be a foregone conclusion.

Just in: Slipped Disc is banned at Juilliard »