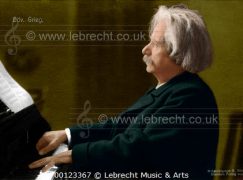 SOMM Recordings are about to release a recording with pianist Mark Bebbington and the Royal Philharmonic Orchestra conducted by Jan Latham-Koenig. The CD includes the … world premiere of what Grieg left of his incomplete Second Piano Concerto, edited and orchestrated by Robert Matthew-Walker.

Although Grieg’s Second Piano Concerto, commissioned by his Peters Edition in 1882, was never completed, the approximately 150 bars he sketched hint at what might have been. Following Grieg’s few instrumental indications, Robert Matthew-Walker has orchestrated ­the complete sketches in the sequence in which they were left, to make a coherent single movement giving, for the first time, the clearest indication of what Grieg had in mind for a work left tantalisingly unfinished. Just three bars have been added to preserve continuity and overall coherence. It receives its premiere recording here.

“It is fascinating to see and hear what was in Grieg’s mind as he embarked on this Second Concerto; certainly the jaunty opening idea shares a similar character to the main Allegro theme of the A minor Concerto’s Finale, but elsewhere there are simply tantalising glimpses of what might have been…”

“Grieg’s Second Piano Concerto remained unfinished, its thematic and harmonic fragments largely unknown until they were published towards the end of the 20th-century. Since then, several composers have written full-scale works based upon Grieg’s material, of which a number have been performed and recorded. But as in each instance around 95% of the finished score is not by Grieg, none can be considered a ‘completion’ of Grieg’s Second Concerto in the sense of Deryck Cooke’s performing version of Mahler’s Tenth Symphony, or Anthony Payne’s elaboration of what Elgar left of his Third Symphony…

…As Grieg’s Second Concerto is unperformable, it seemed to me that rather than let the music remain on the printed page, it should be perfectly possible to present his sketches in such a way that they can be heard in a manner as close to his sound-world as we can get. The sketches, when placed together in sequence, make a broadly coherent single movement, although it is very unlikely that Grieg intended other than a three-movement work. None the less, in hearing those sketches, one after another, flowing as naturally as they do, the listener is at last able to hear just what was in Grieg’s mind at the time.