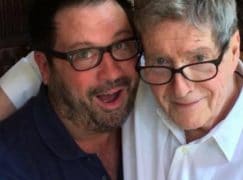 John Copley, 84, is one of the world’s best loved and most experienced opera directors, a fixture at Covent Garden for more than half a century. When he turned up at the Met last week to direct a revival of Rossini’s Semiramide, singers vied with one another to have selfies taken.

So when a mole at the Met told us yesterday that Peter Gelb had called in John Copley and fired him for some remarks overheard in the rehearsal room, we refused to believe the whispers until we had three firm sources.

Last night the Met issued a statement through the New York Times, its trusted mouthpiece, to the effect that ‘following a complaint from a chorister about inappropriate behavior in the rehearsal room that was received on Monday, Jan. 29, John Copley is no longer directing the revival of ‘Semiramide’ that will open on Feb. 19.’

The New York Times has no further information and nothing more to say on the matter.

Here’s what happened. In a rehearsal, male choristers they were told to show different reactions to the ‘ghost’ of Assur (sung by Ildar Abdrazakov*, who was not present). They were asked for a range of ideas. John Copley jokingly said ‘if it were me I’d like to see him naked.’

The vast majority of the chorus, we are told, are horrified and upset at his dismissal. Other singers are posting sympathy messages and photographs of Uncle John.

Company members are saying that it is ridiculous that a single, unguarded remark by an elderly man should have got him railroaded out of town. No-one was being threatened, hardly anyone was offended. For most of John Copley’s long and distinguished life, a remark like this would have been considered a pleasantry.

At worst, he should have received a mild reprimand and told to get back to work.

Gelb’s panicky over-reaction is indicative of the poisoned atmosphere at the Met in the post-Levine climate. No-one admits that they saw or heard anything during 40-odd years of James Levine, so now the slightest misdemeanour by a harmless old man has been made into a hanging offence.

John Copley emerges from the incident without blemish.

You did not read this in the New York Times.

UPDATE2: The Met must apologise to John Copley

*Ombudsman correction: Samuel Ramey and Sir David McVicar have pointed out in comments below that the ghost referred to was not that of Assur, and the director therefore cannot have had  Ildar Abdrazakov in mind. Evidently, our immediate sources confused his role with that of the murdered Nino. We apologise for that misperception.

« Just in: Harpist is found guilty of abusing schoolboy