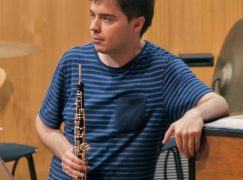 When we reported two months ago that Ramon Ortega, principal oboe of the Bavarian Radio Symphony Orchestra, was leaving one of the best jobs in Europe to join the LA Phil, there was widespread bemusement.

The BRSO is a virtuosic ensemble with elysian working conditions. Ramon, along with other principals, is required to work no more than 20 weeks a year.

He can be on the ski slopes within half an hour of finishing rehearsal and on an Italian beach within an hour’s flight.

Why give all this up for the smogways of Hollywood? Especially when you’re only 29.

Maybe that’s why. ‘The orchestra is open to ideas that in Munich, for traditional reasons, are not carried out,’ he says.

Read what else Ramon has to say here.

« Rock nostalgia: The Smiths reunite for an evening of chamber music

Watch what they do to you when you fly »