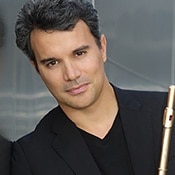 Julien Beaudiment was 22 when he became principal flute at the Opéra National de Lyon. At 35, he won the principal flute position in the Los Angeles Philharmonic, a dream come true. But two years later he resigned, ‘for personal reasons’. Now he is ready to explain why he left, in an interview with his recital partner, Hugh Sung.

You can listen to the full audio interview here. In this segment, Julien explains why, reluctantly, he had to leave LA.

Julien Beaudiment: (Los Angeles) was the most important experience of my life so far. These two years for me – this city, this orchestra, gave me the possibility to understand myself better.

The people were so nice. The administration were amazing. Gustavo is so gifted. I will remember (forever) some concerts I made with him – Rachmaninov Isle of the Dead, Mahler symphonies, Tchaikovsky symphonies… I miss him. After a concert he would always come up to me on stage and say ‘très bien!’ I think that’s the only two words he knows.

My childhood dream was to live in America. I am so lucky to have achieved that.

Now I am comfortable to speak about (why I left). I am suffering for 30 years from a chronic kidney disease. We discovered my condition was really bad when I decided to live in Los Angeles. I saw a nephrologist in LA who told me the waiting list there for transplant was 8-10 years.

Suddenly you realise what is important. In France, the health system is so good, and free. And the waiting list is one to two years. I couldn’t see myself doing dialysis for ten years… And my mother was dying… So…

By chance, the opera house in Lyon had not filled my position. I called them, and went back.

The position of teacher at the Conservatoire was also open. So … tout est bien qui finit bien.

So many people suffer from a chronic disease, but life doesn’t stop. My kidney function is about 40 percent but I am touring the world. You can do so many things…

I think the best is yet to come.

« Israel Phil in mourning for a veteran violinist