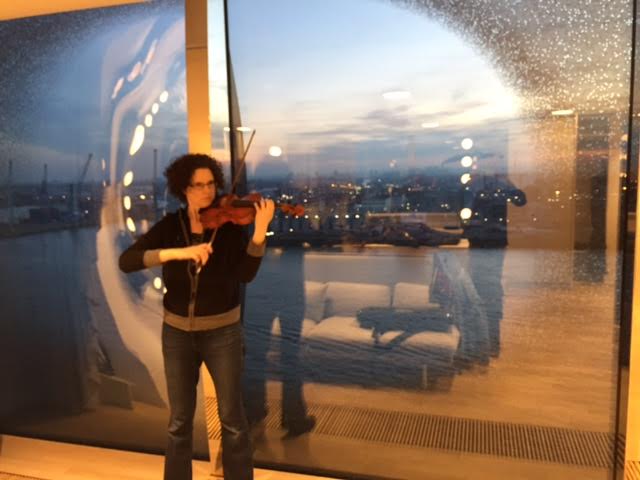 Germans give musicians hassle to renew a residency visa

From our American diarist in Berlin, Anthea Kreston:

I am home again after concerts in Munich, Weiden, Berlin, Geneva, Stuttgart, and two in Vienna. Stressful, exhausting, lonely and fulfilling. The concerts are great – Quartet is tight, strong, flexible, in command, and tender. Night after night, the halls are packed, many with extra seats onstage. The balance between life and Quartet remains difficult and sometimes seemingly impossible, but it happens, it manages.

I was only in Berlin one day these past weeks – and our family residency visa expires soon. No one does Christmas like the Germans, from top to bottom – which includes a generous shuttering of government offices, making obtaining such a visa that much more difficult. Now that we are outside of Berlin proper, our government services are more provincial, farther away and somehow less efficient. It isn’t even possible to make an appointment to get our visa extended – we have to just go and wait in a (surreally) long line. And get there early!

On the morning of our Berlin concert, the whole family bundled up, and at 7 AM picked up my German tutor Ramón at the UBahn (recommended by friends at the Berlin Philharmonic, Ramón is the unofficial tutor of the members, who have come from far and wide to join the Phil – he speaks so many languages, he is like the Tower of Babel of tutors, but in a short, rotund package, shirts somehow always slightly too small, and always just a bit smelly). Ramón is like an extended member of our family – he comes often and stays long, animatedly balancing one-legged on the couch, saying “tell me what I am doing auf Deutsch” and is a fan of Jason’s cold beat salad with feta and pecans.

So we went, a 45 minute ride away – and as Ramón reached to take a number (the waiting room was already crowded with multi-colored extended families), two hefty, thick-set security guards blocked his way. Asking what our purpose was, Ramón said we needed an extension on our visitors visa. They began a heated conversation, which continued to a senior staff person. It was clear that this type of paperwork was processed only on Thursdays, and today was a Tuesday. Voices we raised, fingers pointing quickly in a variety of directions as Ramón explained (louder and louder) that I was a famous violinist, and I wasn’t going to be in Berlin again on a Thursday until late January because I am so famous, did they really want to shoulder the responsibility of kicking out of the country one of the most famous artists, and here is an article about her in Der Zeit and look at this too!! I touched Ramón’s arm – weren’t we pushing a little too hard? And he said under his breath – no – we are almost there – one more minute. Some final pointing and harsh words, with some paper flapping, and we were escorted to the number machine by Thing #1 and Thing #2. We were 83, and they were now on 56. Ok not bad.

So we sat. And sat. The numbers changed excruciatingly slowly, despite there being 5 rotating slots. Around 11, I said to Ramón – I am feeling an impending lunch-break. And there it was – stuck at 68 until 1 PM. Jason took the girls for a walk, found a bite to eat, as Ramón stayed, eyeing the numbers.

Finally, and with a large box of binders in tow (letters of recommendation, work contracts, police documents confirming our address, passports, photos, marriage certificate, birth certificate, papers confirming that the girls attend school, health insurance documents, a certificate of our last toenail clipping, measurements of my diseased cat, and a scan of the contents of our stomachs), we were lead to a room, which was unlocked by Thing #2. A brief but scary altercation between a refugee and Thing #1 was causing a kerfuffle in the waiting room, and we were glad to escape the stuffy crowded space for a sterile office.

Here we were, 3:00, and my dress rehearsal at the Philharmonie was to begin at 5:30 in Berlin.

We were surrounded on three sides by floor-to-ceiling walls of hanging file-folders. Remember the dentist’s front office from 1997? You get the visual. Paper after paper was scrutinized – even documentation of our original flights from America were requested – huffing and puffing was had, many brisk walks to other rooms, phone calls. The result? Because we were outside of Berlin proper, the visa would have to await the physical delivery of the original paper paperwork from the Berlin office. And it takes 90 days to deliver. Nothing is on the computer, and no way of getting it faster (picking it up, emailing it) even though we had been at our new home for 7 months.

An emergency visitors permit was issued, ensuring I could continue living here until late February. A list of other letters and documents that I was to obtain was given to me, and as we left, we felt no assurance that all would be well.

We raced home, I grabbed my clothes, mother, and violin, and I peeled into rehearsal, fresh skid marks behind me. The concert was a success, but I had to fight for dear life to stay focused – I was wavering with exhaustion.

The rest of the tour went without hitch, except that I passed a kidney stone in Vienna. Jason and the girls came to visit me for a couple of days there -what fun was had by all between Sacher Tort, horses and palaces.

There is no doubt that this is a punishing schedule, but it is nothing compared to the rest of those people waiting in that office, some of whom will face uncertain futures. I count my lucky stars.

Some Trouts are more pouty than others »