Several Italian newspapers have acclaimed Yusif Eyvazov as a frontline performer after his La Scala debut on Thursday night in Andrea Chenier opposite his radiant wife, Anna Netrebko.

Certainly, Eyvazov acquitted himself well, as you will shortly read in my review of an extraordinary occasion.

And definitely the production was loudly applauded, despite a (very) few scattered boos at the dozenth curtain call.

So was La Scala’s opening night the making of Eyvazov? 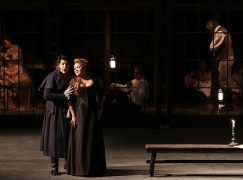 Germans give musicians hassle to renew a residency visa »