Bryn Terfel is out for months with vocal fatigue

The Welsh baritone has pulled out of the Met’s ill-starred Tosca on New Year’s Eve and of a Boston Symphony concert in February ‘as he continues to heal and rest following vocal fatigue’.

Everyone in the cast has been replaced, some twice over

Jonas Kaufmann, hired as Cavaradossi, scratched in March, saying he didn’t want to spend so much time away from his family. Vittorio Grigolo stood in.

Her husband, the conductor Andris Nelsons, followed suit. James Levine stepped in. He was fired for well-known reasons.  Emmanuel Villaume and others will fill in. 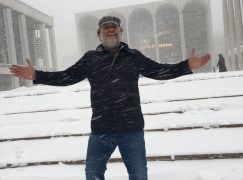