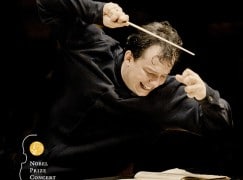 By the time the public see Tosca at the Met on New Year’s Eve not much will be left of the original team.

First, Jonas Kaufman quit as Cavaradossi, saying he didn’t want to be away that long from his family in Europe. Then, Kristine Opolais declined the title role ‘for personal reasons’, causing international ructions in the search for a replacement.

Now her husband, Andris Nelsons has told the Met he ‘has withdrawn’. No reason given.

So here’s the second line up:

Who knew Tosca could be such a farce?

Bryn Terfel is still hanging on as Scarpia.