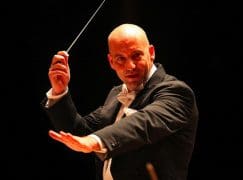 Emmanuel Vuillaume will conduct the new production of Tosca on New Year’s Eve, and most of the run.

The music director of Dallas Opera will stand in for the discredited James Levine, whose signature piece this is.

Maestro Villaume, who recently conducted Massenet’s Thaïs at the Met, is Music Director of the Dallas Opera and Music Director and Chief Conductor of the Prague Philharmonia. He made his Met debut in 2004 conducting Puccini’s Madama Butterfly, and his subsequent performances with the company have included Saint-Saëns’s Samson et Dalila, Bizet’s Carmen, Massenet’s Manon and Gounod’s Roméo et Juliette.

Sir David McVicar’s new staging of Tosca opens on December 31, with Sonya Yoncheva as Tosca, Vittorio Grigolo as Cavaradossi, and Bryn Terfel as Scarpia. The January 27 matinee will be transmitted live as part of the Met’s Live in HD series, which reaches more than 2,000 movie theaters in 73 countries around the world.

Later performances on April 21, 26 and 30, and May 4, 8 and 12, 2018, will star Anna Netrebko in the title role opposite Marcelo Álvarez as Cavaradossi and Michael Volle and Željko Lučić sharing the role of Scarpia. The April and May performances will be conducted by Bertrand de Billy.

Gareth Morrell will conduct the performance on January 18, 2018. The conductor for the January 15 performance will be announced at a later date.

« The NY Times goes into agonies over Levine’s recorded legacy

Finland is 100 today and the music goes on and on »