He retired three years ago in failing health, but Michael Gielen can sit back in his armchair on Thursday and listen as German and Austrian radio stations mark his 90th birthday with fulsome retrospectives.

His legacy is considerable. As music director of SWR from the mid-1980s he was a leading driver of modernism, from Schoenberg (to whom he was related) to Ligeti and Lachenmann. His own compositions are written in strictly serial form. 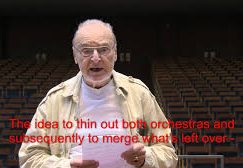 SWR have since done their best to wreck his legacy by merging two orchestras.