Off the planets: Two lost Holst manuscripts are found down under

A routine clearout of the library of a community orchestra in New Zealand has turned up two manuscripts by the English composer Gustav Holst, both registered as missing since 1906.

Justus Rozemond, Music Director of Bay of Plenty Symphonia, says: ‘Our librarian, Gloria Pheasant, and I were cleaning up the sheet music library a few years ago. We were throwing away tons of old photocopies and found these hand-written scores. We didn’t really believe we were holding genuine Holst manuscripts, but there was just enough of a tingle of excitement not to throw them away.’

They agreed that the handwriting looked like Holst’s, and that he had lived at the Richmond address at the foot of the page, but they put the scores in a drawer and forgot about them for several years. Now, the scores have been validated as Holst’s originals for ‘Folk Songs from Somerset’ and ‘Two Songs Without Words’.

They appear to have been brought to New Zealand in the 1960s by an English flute player, Stanley Farnsworth.

‘Folk Songs of Somerset’ consists of ten folk songs collected by Cecil Sharp. Holst conducted the premiere in Bath in 1906 before converting three of the songs into his Somerset Rhapsody, published in 1907. It is thought that the Bath premiere was the only performance of the full Folk Songs score.

BoP Symphonia are planning to rectify that omission. 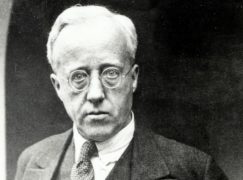 « A singer with dyspraxia