What went right at the Queen Elisabeth cello competition?

There was very little international coverage, the website was the worst of any major competition and the results were published in the dead of night. Yet, despite losing several crowd-pleasers at the semi-final stage, there seems to be a feeling that the Brussels competition did most things right.

Here’s an assessment from one of the TV commentators, the cellist David Cohen, exclusive to Slipped Disc.

An insider’s testimony into the first Queen Elisabeth Cello Competition

Yesterday I was in Belgium, my native country, and I was so happy to be making the TV commentaries for Musique 3 during the first ever Queen Elisabeth Cello competition held in Bruxelles’s beautiful Palais des Beaux Arts.

Let me start by sharing with you how proud I feel of my country for having finally agreed, after decades of pleading from leading cello teachers in Belgium and around the world, to finally add the cello as a category to the Queen Elisabeth International Competition. Why was it not possible sooner? The competition’s most influential director, Le Comte De Launoy, felt it was his duty to respect her Majesty’s wishes of the categories she had specifically instructed to be used. They also happened to be her favourite instruments: violin, voice, piano and composition… not the cello.

But since the passing of this great and benevolent music lover, the competition was able, after the collapse of the last Rostropovich cello competition in Paris, to take a chance and add the cello as another category to the competition.
As a child, I so often dreamed that this pinnacle of music competitions would finally open its doors to my instrument… The cello has always been important in the Belgian music making. The influential school of Belgian cello playing (Servais, the Paganini of cellists) is well documented.

Yesterday was the finale of this well organised competition. Like a well oiled engine, after weeks of early rounds, the tradition of seven days of seclusion, including all technical devices, was imposed, allowing the 12 finalists to learn the compulsory piece specially composed by Toshio Hosokawa. They were shown the score seven days prior to the final round in the confines of the Chapelle Reine Elizabeth, a private music institution just outside of Brussels.

I awoke yesterday to find my social media busy with posts, comments, tweets and likes about the different candidates who had already performed and were awaiting the prize announcements this evening. It was a real frenzy out there with a big buzz; the candidate with rings and long hair who dropped his bow (no thanks to the conductor for kicking it! accidents do happen to everyone), the candidate who broke her strings, the candidate whose late parents pleaded with his teacher to look after him (both teacher and student ended up present at the final… the former was playing, and the latter commentating for the RTBF).

There was some controversy with regard to the poor variety of concertos being performed for the finale. There were 6 Shostakovich concertos, 4 Dvorak concertos and 2 Schumann concerto. Also disappointing was the lack of Belgian competitors, with countless articles in the newspapers about their absence.

Although Shostakovich’s first concerto has more of a “Wow!” factor (especially the ending), I wished someone would have taken the risk of doing the Barber, Lutoslawski, Dutilleux, or even the Prokofiev Sinfonia Concertante.

These last few days and weeks reminded me of my time as a competition junkie and how juggling studying, performing concerts and hopping from one competition to another ruled my life as a young musician. As Bartok famously once said, “Competitions are for horses”. In a horse race, there is a definitive winner. It is impossible to be so black and white in music. In tennis as we all know, there are clear points to be gained, but in a music competition, we try to quantify something which is in it’s very essence, unquantifiable. Each competitor receives points from each jury member, and in the Queen Elisabeth (to keep bias at bay), apparently the highest and lowest scores are thrown out for each competitor. What we then see is an illustrious line-up of averages.

But the question is; how does one judge these young musicians, especially when the likeliness of these jury members to ever actually sit in the audience of one of these young musicians future performances is quite slim? I say it’s the public that matters, and that is why I was always more interested in winning the Public’s prize in an international competition. This, because these were the people to whom I was and would be ultimately playing for, and knowing the Belgian audience as well as I do, they are the ones that really matter.

Having listened to some of the semi finals, I was saddened, but not surprised, that many incredible young musicians were taken out in order to place in the finals some admittedly very fine instrumentalists, but some of whom arguably had less musical individuality.

Time will tell us which one of these magnificent and so deserving young cellists will make it long term on the international scene or if they will face the fate of so many before them. For my part, I wish them the absolute best this musical life has to offer. It is impossible to tell which one of these competitors will go where, do what, and who will fulfil a boxed up star-studded future we have in mind for them. Often times, it is the ones who seemingly do not succeed early, who are the ones that actually push through in the end. Other times, it is very close to what the jury decided. And other times still, it is exactly the upside-down version of the prizes awarded.

The reality is that there is no ranking. As wise and illustrious as this jury was, no one has a crystal ball. Competitions are a means to an end, rather than a goal to be conquered. They should be used to gain priceless experience, push ones self through massive pressures, present ones self on an international platform which would be hard to come by through other means and ultimately, to find ones true voice through it all. Each competitor, to whom I had the pleasure of listening, had something special, truly unique and I sincerely wish them the very best for their futures, which will all no doubt be rich, varied and a completely personal journey, of which the Queen Elisabeth Competition has been a multi faceted and illustrious stepping stone. 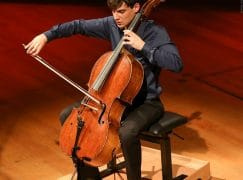