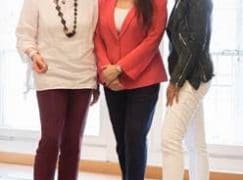 The German violinist, 54 next month, celebrated an anniversary today at Salzburg Whitsun Festival. 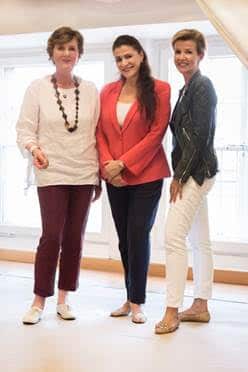 “On 29 May 1977, this stage witnessed a Pentecostal miracle in music. Herbert von Karajan, to whom Salzburg owes so much, including this very theatre, invited the prodigy violinist to perform even before her 14th birthday. She came, played and conquered audience and reviewers. And thus it has remained ever since,” said Helga Rabl-Stadler.

The Festival President thanked Mutter for this morning, which was not merely an “event”, but a musical highlight that was going to live on in the consciousness of all those present. She called Anne-Sophie Mutter a discoverer, enabling new interpretations of supposedly familiar pieces.

Anne-Sophie Mutter also briefly addressed the audience, commemorating Herbert von Karajan, with whom she worked for 13 years until his death, recalling how he would often ask her to join him shortly before a concert, to keep polishing details of their interpretations.

Cecilia Bartoli, whose birthday is today, was celebrated by the musicians and audience with a rendition of “Happy Birthday” before the audience again broke into rapturous applause.

After Anne-Sophie Mutter’s anniversary concert, Cecilia Bartoli hosted a Charity Lunch at the Karl-Böhm-Saal. The award-winning chef Johanna Maier and her sons treated the guests to an early-summer menu created especially for the Festival. Net proceeds will be donated to the Salzburg Festival’s education programmes and the Anne-Sophie Mutter Foundation.

« What went right at the Queen Elisabeth cello competition?