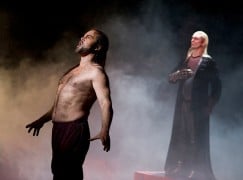 Is the Met trying to rig the election with Donald J. livecast?

The irresistible groper is coming tonight to a movie house near you.

A London orchestra loses its leader »