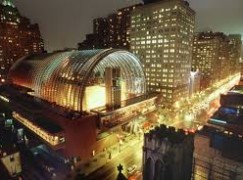 Kaiser warns that the orchestra is overly dependent on large donors, any one of whom could trigger a crisis by pulling out. He says smaller donors have been neglected and the organisations communication skills are minimal (we could have told you that).

He recommends town-hall meetings, improved fund-raising in the $25,000 to $250,000 bracket and tighter coordination between artistic plans and financial realities.

A earlier recommendation for the orchestra tom merge with the Kimmel Center where it plays has, for some reason, been dropped.