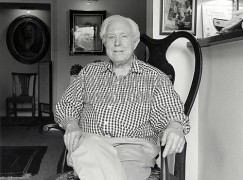 Terry Teachout thinks they are.

The drama critic bangs the drum in the Wall Street Journal on their behalf, citing as evidence that ‘Some quick research shows that Harris, Mennin, Piston, Schuman and Elliott Carter (who together wrote more than 100 concert symphonic works) had, in the past five years, a total of just 20 performances by U.S. orchestras.’

That, you might say, is a first world problem. If US orchs don’t think their own composers will fill a hall, why should anyone else imagine that they are worth performing?

But there’s more to the problem than hardcore capitalist economics.

There is a measure of resistance in some quarters to US symphonic music and it has been embedded for quite a while. In a culture swamped by American movies, pop music, fashion and art, some European and American aesthetes try to preserve the concert hall – perhaps unfairly – as a US-free zone.

Tough on US composers, but there you are.

Next year, however, when Steve Reich and Philip Glass turn 80 we will be inundated with their works.

« The ‘unknown unknowns’ of classical recording