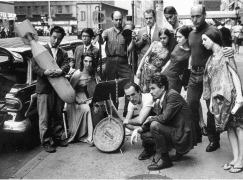 Naked cellist gets the show of her life

I have written a few times about Charlotte Moorman, a livewire of the 1960s New York avantgarde who, along with her friend Yoko Ono, placed her naked body at the centre of her performing art.

Charlotte received her first biography the year before last, and very good it is, too.

Now she is the subject of a major documentary and an exhibition in Chicago.

If she had kept her clothes on, that might not have been the case, even with Yoko’s occasional advocacy. 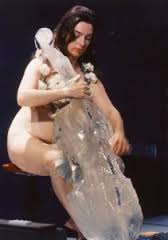 Sample: Feminist artists sometimes dismissed Charlotte as a narcissist. They thought also she was letting herself be used by male artists. But nothing could be farther from the truth. Charlotte knew what she was doing, she had complete control over the use of her body and she saw her body as a material that could be used for forms of expression whether it was clothed or unclothed. In fact, in one case, she talks about her nudity as “the costume.” Charlotte was fearless about putting this raw material of her body at the disposal of art, but also, deploying it to make art herself. In the way that some artists use canvas and a brush, she used her nudity.

‘Most auditions won’t lead to a contract’ »