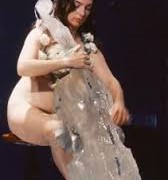 The hidden meaning of the topless cellist

I published the first review in the Wall Street Journal this weekend of a groundbreaking biography of Charlotte Moorman, energising icon of the musical avantgarde. Half a century after her blazing provocations, Charlotte appears in Joan Rothfuss’s book as a seminal – even necessary figure. Read my review here.

Extract: During “Originale,” Moorman took off her dress and played “startlingly nude,” as Ms. Rothfuss puts it. In “Human Cello,” by Paik, she drew a bow across the composer’s naked torso, gripped between her legs. She played “The Swan” by Saint-Saëns in see-through cellophane and “Véxations” by Satie with breasts bobbing over the keyboard. In Yoko Ono’s “Cut Piece,” she sat impassive on the floor while audience members cut off her clothes. These were heady, crazy events, harbingers of a new concept of public performance.