Dmitry Hvorostovsky: The doctors told me, ‘you won’t die’

The great bass-baritone has given an extraordinarily revealing account to the Tass newsagency of his six-month struggle with brain cancer. Extracts:

+ Strictly between you and me. This is a great secret of mine: I don’t run my website or page in the social networks myself. I rely on assistance from trained specialists. Naturally, they do everything with my prior consent and approval, but I don’t write posts in Facebook myself or place photos in Instagram. I don’t even remember the passwords to them…. God is my witness, I didn’t have the slightest intention of bolstering publicity using rumors about my illness and other people’s curiosity.

+ Firstly, the main message I heard from the doctors was this: “You won’t die.” Of no smaller importance was the promise that I would be able to remain on stage and lead an active life. True, some restrictions might follow, I was told, but certain losses will be unavoidable anyway. For the sake of this goal it was worth struggling with the inconveniences chemotherapy and radiotherapy would entail.

+ I’ve turned half-bald. Lost all hair on the back of my head. At a US hospital in Rochester I underwent a mighty biopsy under general anesthesia. Without that it was impossible to realize what method of treatment should be selected. In fact, I had holes drilled in the base of the skull. If you bring your hand close enough to the irradiated area, you will feel it is warmer than others. Occasionally, when blood rushes to this place, I have strong pulsations there. Feel pretty close to hearing music… 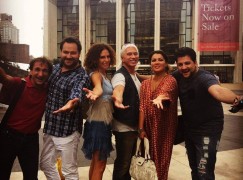 + On September 25, at the opening of a new season at Met, where I made my first appearance after the break for medical treatment. I knew perfectly well that the audience will explode with an ovation the moment I would appear on stage. I was almost sure that the conductor would pause the performance for a moment to let the spectators express their feelings. It was essential to get through these minutes, not to lose breath, to hold back tears and not to collapse on the floor right there. I am not exaggerating. It was a tremendous psychological test. And the most complex one. Not the global process of resuming my professional career, but the very first step. The role of Count di Luna in Giuseppe Verdi’s Il Trovatore is considered one of the most difficult ones among the baritones, but I love it. As the plot unfolds, my character does a lot of fencing fights. My current condition as it is, there was surely an extra reason for being worried, but, as I’ve already told you, my greatest concern was not about that, but about the moment I was to begin the first monologue. As I walked there, I kept saying to myself: “Hold on! Hold on!” So it happened. I stayed firm.

+ We lined up for the final bow. The conductor – Marco Armiliato – suddenly grabbed me by the hand and pushed forward. At first I was in confusion. It’s against the custom. And then I saw flowers flying towards me from the orchestra pit. Many flowers! Very many! I did not know what to do. I looked back towards my partners. Anna Netrbeko, Marco Armiliato and others were applauding… and weeping. I am not a man of iron, either! I bent down and started picking up the roses lying in front of me with trembling hands, while many more flowers kept pouring in! Long and very thorny… Then I turned and handed the ones I’d just picked up to the ladies on stage.

Believe me, such a token of recognition from the Met orchestra is hard to over-appreciate.

« Death of a trailblazing Brazilian pianist