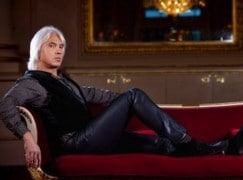 The great Russian baritone has just issued the following statement on his website:

It is with great regret that Dmitri must cancel all performances from now until the end of August. He has recently been suffering from serious health issues, and a brain tumor has just been diagnosed. Although his voice and vocal condition are normal, his sense of balance has been severely affected. Dmitri will begin treatment this week and remains very optimistic for the future.

We wish Dmitri a full recovery.

Winner of the 1989 Cardiff Singer of the World, Dmitri has gone on to sing at all major opera houses. In Russia he commands the highest fees of any recitalist, while steering clear of paying homage to the Putin regime. Dmitri, 52, is one of the most popular singers among his colleagues.

Millions tune in to the Tchaikovsky Competition »