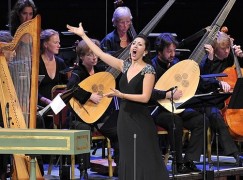 I saw that in his review for the Telegraph Rupert Christiansen claimed that Orfeo at the Proms was amplified. I thought it wasn’t true. [He wrote that he] “was rather disturbed by evidence of opera’s equivalent to doping in athletics: electronic amplification.” (http://www.telegraph.co.uk/music/classical-music/proms-2015-prom-25-monteverdi-orfeo-review/).
Today, that portion has been removed, without any explanation or apology.

1 day ago – Francesca Aspromonte sings in Monteverdi’s Orfeo at the Proms Credit: CHRIS CHRISTODOULOU. Rupert Christiansen … was rather disturbed by evidence of opera’s equivalent to doping in athletics: electronic amplification.

I was there with some fellow enthusiastic amateur opera-goers. We discussed the possibility when we saw the microphones worn by principals – but radio 3 certainly doesn’t economize with the number of microphones it uses. It didn’t sound to us like it was, given the considerable variation based on direction and location of singers; if it was amplified it was done so as to be undetectable from where we sat. We did not have the very best seats (choir) and when the singers pointed the other way, there was a variation in quality. Certainly there was amplification of some of the keyboard music but I have always understood that as fair game for early music in larger venues.

It appears to me that this has been very quietly removed. As an amateur without any musical training, I might be fooled. But isn’t the point of a critic that they can tell the difference? Or was the line about doping just too clever to cut? The silent removal doesn’t say much for editorial standards at the Telegraph either.