Teresa Stratas: Jon Vickers was the love of my artistic life

We have received this tribute from the great Canadian soprano:

Jon was the love of my artistic life. He was the greatest artist that I have ever worked with, but was also the greatest artist I ever saw or heard sitting in an audience. One always had the feeling that you had to reckon with the whole wretched world, but also with the exquisite beauty found in it simultaneously.

Jon Vickers defies words and descriptions, and his magnificent voice carried the entire danger, volatility, and suffering of humanity within it and yet at the same time, the tender and positive redemptive power of love.

It was as if his voice knew everything about this world. Maybe that’s why we could always recognize his sound for it was unique and like no one else’s. His voice could be filled with fury and simultaneously filled with tenderness.

He was a mysterious man both on and off the stage. In my first Otello in Montreal with Jon in the mid 1960s, I had a feeling he could snap me in two, the element of danger loomed so large on stage. At the same time he was so vulnerable, that I wanted to run to him and cradle him in my arms, despite his fierceness. 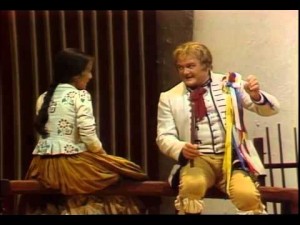 He always brought his high intelligence and those unique qualities to every one of his roles. For example in the Bartered bride you didn’t know whether to laugh or cry. He was also such a perfectionist. I remember he would give a monumental performance in Pagliacci, then pick me up at the end when I was still in awe of the moment and ask me if he had been okay? He was always striving to make his art better.