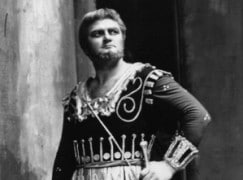 A tenor unlike any other

The death of Jon Vickers, aged 88, takes us back to an age when giants walked the land.

Built like a stevedore, Vickers filled the stage with an unchallengeable presence.

I saw him late in his career, in a cheap Covent Garden staging of Handel’s late oratorio Samson, when his pathos as the blinded giant – ‘no sun, no moon’ – was so vivid I can see and her it now, four decades later.

Vicker was a law unto himself. Passionate in his Christian beliefs, he pulled out of a Tannhäuser after deciding that Wagner was anti-Christ. He played Peter Grimes as the evil that is within us all, infuriating its composer. Everything he did was touched with principle and certainty.

I tried to interview him twice about aspects of his life and work. Both times, I got a curt refusal. Vickers never talked. He was who he was, inimitable, unforgettable.