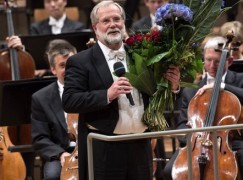 Andreas Blau, who delayed his retirement by a year while a successor was sought, has bid farewell to the orchestra, in which his father played before him.

His seat will be taken by Mathieu Dufour, ex-principal flute of the Chicago Symphony.

“I’ve always considered it a privilege to be able to play in this orchestra.” With these words Andreas Blau, principal flautist of the Berliner Philharmoniker, said farewell to his colleagues and Sir Simon Rattle after his last concert on 20 June 2015. The son of a Berliner Philharmoniker, he knew the orchestra from childhood. After his music studies with Karl-Heinz Zoeller and at the National Music Camp at Interlochen in the USA, he became principal flautist at the age of only 20. He was a member of the Philharmoniker for more than 46 years and played under three chief conductors: Herbert von Karajan, Claudio Abbado and Sir Simon Rattle. But not only that: “When I started, it was a completely different orchestra. In effect, I’ve played with an orchestra of 250 members in the course of my career,” he said humorously.

Andreas Blau was not only a dedicated orchestral musician who enchanted audiences again and again with his clear, flexible sound and his stupendous phrasing, he was also much in demand as a soloist, chamber musician and teacher. As Sir Simon said in his brief farewell speech, his presence would long be felt in the Philharmonie: “I always believed that concert halls remember their music and that it’s somehow left on the walls. All your beautiful sounds are on these walls and they remain here. And may we say, you are deep in our hearts and you remain there. Thank you Andreas!”