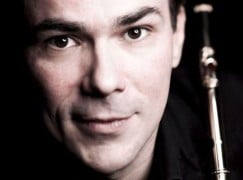 After months of cogitation Mathieu Dufour, Principal Flute of the Chicago Symphony Orchestra has submitted his regination, effective November 4, 2014, in order to join the Berlin Philharmonic in the same position in the new year. We hope he’s made the right choice.

Press release follows.  UPDATE: Why would he do that?

Finally, a credible list of the best US music colleges »