The most poignant picture ever taken of Johannes Brahms

Andrea Bambace has published a picture of almost mythical power and importance.

It shows Johannes Brahms with three others, shortly after the funeral of Clara Schumann, his eternal beloved. 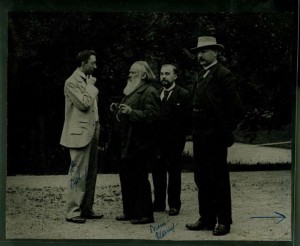 The poignant point of the picture is that Brahms all but missed Clara’s funeral.

Clara died, after a prolonged illness, on May 20, 1896. According to Richard Specht’s 1928 biography of Brahms, drawn from people who knew the composer well, Brahms ‘was quite unprepared for the news… What is worse, it reached him a day late. His landlady in Vienna had left the telegram unopened and forwarded it to him by letter.’

Brahms caught the first train from Bad Ischl to Frankfurt, fell asleep and woke up found himself travelling in the wrong direction after missing a connection. He arrived ‘half-dead in Frankfurt, only to learn that the funeral was not taking place there, but at Bonn, Clara having expressed a wish to rest at Robert Schumann’s side.’

When he reached the cemetery in Bonn, ‘bathed in perspiration, he found that he was too late for the service at the chapel; he met the funeral procession on is way to the grave… But he could not bear to remain among the mourners: he took refuge behind a bush and let his tears flow at the side of his friend, Rudolf von der Leyen.’

This may be the moment we are seeing here.

On his return to Bad Ischl, friends remarked that his face had turned yellow. Brahms died of liver cancerelevn months later.

The picture itself tells much of this story.