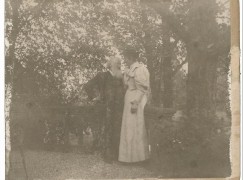 On Brahms and bird-shit: what we didn’t know

The picture we published yesterday of the great composer at (or shortly after) the funeral of Clara Schumann in May 1896 has provoked a plethora of information from scholars and afficionados alike.

First we can identify the gentlemen standing with Johannes Brahms in the picture (thanks, Eleanor Hope). They are: Heinz and Erich von Beckerath, Gustav Ophüls, Brahms, Bram Eldering, Alwin von Beckerath.

A fine copy of the original picture can be found in the Henryk Szeryng collection at the Library of Congress. A further set is located at the university music library in Buffalo, NY. Its rarity is well-attested. 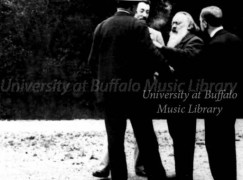 In the above shot from the same set, Brahms appears to be cleaning his friend’s jacket of bird droppings. The matter is comprehensively clarified in an essay by Ilias Chrissochoidis of Stanford University, who writes as follows:

Brahms’ last visit to the Rheinland in May 1896 is well documented. The death of Clara Schumann, the great love of his life, threw him into a railway adventure in search of her final resting place in Bonn, where he arrived just in time to attend the funeral procession. Emotionally devastated, he then sought refuge at a private music festival at Hagerhof, Walther Weyermann’s estate at Bad Honnef. Brahms’ strong links to the Mennonite community in the area went back as far as 1880…

Obvious as is their historical value, the photographs remain practically unknown to the public and have been only vaguely recalled by Brahms experts….

In contrast to the image of a master that we have long been accustomed to, von Beckerath’s photos capture only Brahms the man and, even worse, his unimpressive stature. Indeed, Gustav Ophüls singled out the first one as evidence of Brahms’ height. He being 1.82 cm tall and both men standing on the same line,  he estimated his friend to be around 1.70 cm. Surrounded by people considerably taller (and leaner) than himself, Brahms’ image suffers and what remains clearly visible of his monumental head is the long white beard. Equally alienating is his apparently flirtatious posture next to hostess Emmie Weyermann only a few days after Frau Schumann’s funeral, an image clashing with existing reports of a mourning Brahms.

« The fate of two Paris orchestras ‘hangs in the balance’

The new head of San Carlo is … the old one »