At the Iolanta Curtain Call tonight a protester with a poster of Putin with a Hitler moustache and other photos I couldn’t make out walked to center stage and held the poster up for the audience and then turned to show it to the cast, who seemed surprisingly unfazed.

He appeared to walk in from stage right but I think he climbed onstage from the side of the pit.  He was soundly booed.   And security was VERY tight getting backstage after Bluebeard’s Castle.  Two NYPD stood at either side of the interior stagedoor.  Many were turned away.

Outside, about 25-30 protestors chanted ‘musicians have choices’ and something to the effect of ‘shame on the Met’ and ‘Netrebko supports terrorists’. 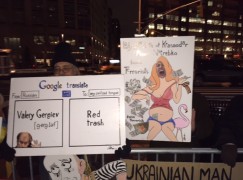