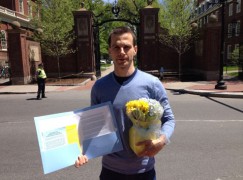 Should the Met impose life ban on stage protestor?

There was widespread concern last year when Harvard banned one of its doctoral graduates for life after he mounted a stage where Vladimir Spivakov and the Moscow Virtuosi were performing.

The protestor, Dr Roman Torgovitsky, is a biomedical scientist ad martial arts practitioner. He is also a voluble anti-Putin activist.

Last night, Dr Torgovitsky mounted the stage of the Metropolitan Opera, disturbing the artists as they took curtain calls. He was duly arrested. Should he now be banned from the Met?

Harvard was criticised for trampling on academic freedoms  by imposing a life ban. However, in another field, there is generaly no objection when a football supporter who misbehaves during a match is removed and banned. Those who disrupt musical events with extraneous political protest must expect similar treatment.

If the Met were to ban Dr Torgovitsky, he would have no cause for complaint.

« Apart from that, Mrs Bluebeard, how did you enjoy the show?