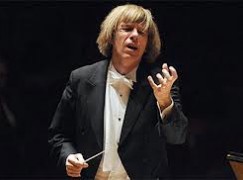 We are devastated to report the death of Israel Yinon, the Israeli-born conductor, while conducting a concert in Lucerne, Switzerland.

He fell headlong to the ground, amid cries from musicians and audience. His partner, Amari Barash, who was playing oboe in the orchestra, rushed forward and talked to him while medics fought to save his life. ‘We had a brief conversation and he continued to maintain eye contact with me as medical personnel attempted to rescue him,’ writes Amari to Slipped Disc. Tragically, Israel died where he fell.