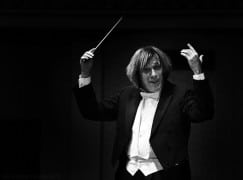 Yisrael Yinon, who died mid-concert in Switzerland last night, was a leading researcher into composers who were murdered in the Nazi Holocaust. He was the first to record the symphonic works of Viktor Ullmann. He went on to rediscover Hans Krasa, Pavel Haas and Erwin Schulhoff, performing some of their works for Decca’s Entartete Musik series.

I was present at his recording of the most important of these retrievals, an opera by Haas called The Charlatan, restaged in Prague in 1991 and filled with a totally unexpected lightness. Yinon addressed this music with a sense of holy mission. He was not deflected from his purpose or, at times, the easiest of colleagues. But the resultant record speaks for itself.

His death, at 59, is a terrible tragedy, the loss of a decent man and an excellent musician.

Born in Israel, he studied with Mendi Rodan and Noam Sheriff before basing his career in Germany.

Breaking: Crisis at ENO as chief exec follows chairman out of the door »