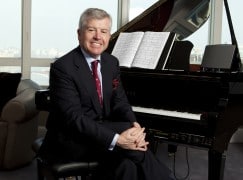 We hear that Martyn Rose has quit, as predicted.

His interim successor is Dr Harry Brünjes, a sometime Harley Street doctor who presides over a small medical industry and is married to a choreographer (official bio below).

The good doctor is an avowed supporter of ENO’s artistic ambitions. Whether he can raise a small fortune and sort out several malfunctioning departments before the cash runs out remains to be seen. ENO is at the threshold of A&E.

Dr Harry Brünjes initially graduated from London University and then qualified in medicine at Guy’s Hospital. The Premier Medical Group developed from his Harley Street practice. There was an initial period of organic growth, followed by an acquisition strategy which culminated in a trade sale to Capita in 2010, with Harry remaining as Chairman of PMG. He is also Group Medical Director of Capita, non-Executive Director of The Good Care Group and Chairman of Woodsta Investments.

Harry is Chairman of Lancing College, Vice-President of the College of Medicine and a Board member of the Expert Witness Institute, Valderrama Golf Club and the English National Opera. Outside of medicine, Harry enjoys all sport, is a former professional pianist and has a lifelong interest in music and theatre. He is a regular writer, broadcaster and lecturer. Harry is married to the choreographer/director Jacqueline Storey and they have four children.

English National Opera (ENO), has announced today that its chairman, Martyn Rose, intends to step down from his role on 15 February 2015. Dr Harry Brunjes, currently serving as a non-executive trustee at ENO, will become acting chairman from 15 February 2015.

“It has been a privilege to serve as chair of ENO, one of the world’s most renowned opera companies, recognised for its innovative and groundbreaking productions. ENO has faced a challenging and testing period during my time as chair. Working closely with the ENO executive, my priority has been to help shape and prepare the organisation for the changes necessary to ensure that it can continue to flourish with reduced public funding and maintain its production and artistic excellence. I wish ENO every success for the future.”

Speaking on behalf of the board, Dr Brunjes commented: “We have been fortunate to have Martyn as our chair through a very demanding period for ENO. He has led the organisation successfully through his time, ensuring that we have the right commercial and artistic plans to thrive with the reality of less public subsidy in the future.”

Dr Brunjes added: “Now that our plans for the future are agreed and ready for review by  Arts Council England (ACE), our focus must be on the execution of these plans. That is the immediate priority for me, the board, and the executive team.”

The board will now embark on a search process for a new chair. Dr Harry Brunjes will remain acting chair until a new chair is appointed.