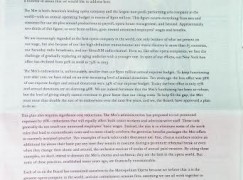 We’ve been warning that the Metropolitan Opera was losing the media war.

This morning we received proof.

A full-page ad in the New York Times explains the Met’s position in cost-cutting negotiations with the unions.

It has all been said before in interviews. But the Met has lost the argument.

Now it’s having to pay a five-digit sum, certainly not far short of $30,000, to try and buy back public support.

The Times reported: The Met’s board took out an advertisement on Friday in The New York Times endorsing the proposal to cut labor costs, saying that while rising donations had offset declining box office revenues, “the level of giving simply cannot continue to grow faster than our rising costs.”

Here’s what the musicians think of it all.

« Lost memoir: Haydn told me, ‘I am but a child compared to Mozart’