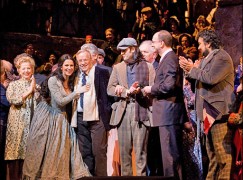 Musicians in the Metropolitan Opera Orchestra have been conducting a box-office study, which they have shared with slippedisc.com.

Key finding? Gelb’s gloom about the future of opera is rooted in his own failings.

Key paragraph: Peter Gelb’s mantra as of late is, “Opera is dying.” However, the Met’s box office returns for recent revivals of productions which pre-date Peter Gelb, like Norma (which sold last season at 90% of capacity), La Bohème (87%), Così fan tutte (93%), and the English version of The Magic Flute (100%) tell a different story. The Zeffirelli Bohème, premiering in 1981, cost $2.8M, but over the past 30 years, the production has paid for itself over and over at the box office. These grand productions are a Met trademark, and the box office shows that they are what people are most interested in seeing. Recent box office returns show Peter Gelb revivals sell less well than Pre-Gelb productions. Would it be more correct to say: “Peter Gelb’s productions are dying”?

Day by day, Gelb is losing public opinion and media support. He goes into the contract negotiations friendless and without solutions.

It is truly disheartening to see articles in the media that accept Peter Gelb’s claims that
there is a sudden and dire state of financial affairs at the Metropolitan Opera. In giving
these interviews, Peter Gelb’s primary goal seems to be to obfuscate the truth about his
own managerial shortcomings, even going as far as to disparage the art form he is tasked
to promote, and insult the public he has been entrusted to attract. Moving forward, it is
important that those of us who care about the Metropolitan Opera ask hard questions and
seek a deeper understanding.

Peter Gelb’s mantra as of late is, “Opera is dying.” However, the Met’s box office returns
for recent revivals of productions which pre-date Peter Gelb, like Norma (which sold last
season at 90% of capacity), La Bohème (87%), Così fan tutte (93%), and the English
version of The Magic Flute (100%) tell a different story. The Zefferelli Bohème,
premiering in 1981, cost $2.8M, but over the past 30 years, the production has paid for
itself over and over at the box office. These grand productions are a Met trademark, and
the box office shows that they are what people are most interested in seeing. Recent box
office returns show Peter Gelb revivals sell less well than Pre-Gelb productions. Would it
be more correct to say: “Peter Gelb’s productions are dying”?

In the recent Wall Street Journal article about Prince Igor, the Met asserts that the
production budget is the result of a careful negotiation between management and
directors, “to keep costs in line.” The numbers tell a different story. According to the
Met’s financial statements, in Joseph Volpe’s last season as general manager (2005-06),
the cost of new productions was $7.6M. By 2011-12, under Peter Gelb, that cost was up
to $24.3M. Is Peter Gelb’s idea of keeping costs in line a 220% increase in spending on
new productions? If revivals of Peter Gelb productions routinely suffer at the box office,
is it in the Met’s best interest to continue investing in his expensive artistic vision?

That same Wall Street Journal article notes, “Some nights, when there was no room to
store [Prince Igor’s $169,000 poppy field] in the wings, the poppies had to be trucked to
off-site storage. They filled eight trucks. The Met didn’t disclose the cost of that storage,
saying it wasn’t part of the production budget.” Logically, if the nature of a production
necessitates certain expenses, those must be considered production expenses. What other
“non-expenses” are being hidden behind this nonsensical pretext? Are there other ways
the Met has chosen to shuffle the numbers in an effort to downplay its wasteful spending
practices under Peter Gelb?

This question brings to mind the recent Robert LePage Ring Cycle debacle. Critics
overwhelmingly panned it. Audiences quickly tired of it and attendance dropped
precipitously. The audience didn’t literally die off, as Peter Gelb would have us believe;
they just didn’t like it. The final run of Otto Schenk’s Götterdämmerung (2008-09),
which premiered in 1986, sold at 100% of capacity. The LePage production premiered at
88% and the revival sold at 67%. Did 33% of the audience for the Ring die off after just a
few years? Is it possible that a well-educated base of opera fans were turned off, and
following more and more dismal critical reviews, the audiences stopped coming? In light
of all of this, Gelb insists on standing by this production, referred to by The New Yorker’s Alex Ross as “the most witless and wasteful production in modern operatic history.”

Peter Gelb regularly states that 2/3 of the Met budget being spent on labor is problematic.
Labor, however, is the artistic product audiences pay to experience when they come to
the Met. People attend performances at the Met to see first-rate singers and chorus, the
world-class MET Orchestra, dancers, performers wearing costumes built by the best in
the business and prepped for the stage by the great make-up artists. Basically, everything
you see when you attend the Met is labor (security guards, ushers, etc), and the wages of
these laborers has barely kept up with inflation over the past ten years. In fact, the cost of
Union payroll and benefits (which includes solo artists) as a percentage of the Met’s
budget has actually declined between the years 2006 – 2013, from 69.4%, to 65.6%.
Clearly, reducing the percentage of labor costs does not coincide with increasing box
office returns. The more relevant question is: “Where is the other $100M+ in increased
costs going?” How vital are those lavish expenditures to bringing the Met’s audience a
world-class artistic product? Should there be a deeper look into those costs and the return
on that investment?

Another question regarding these claims of crisis is: “Why now?” The Met presented a
rosy picture of its financial status for fiscal year 2012. It would be truly remarkable for an
organization to so quickly go from multiple years in the black and surpluses to the
precipice of bankruptcy. Is it a mere coincidence that Peter Gelb insists the sky is falling
right around the time that labor contracts are expiring? Without full disclosure of its
financial records, can we trust the Met’s motivations in asking for drastic cuts to musician
salaries, health care and other benefits? All we have been asking for is transparency. We
have had over 30 years of peaceful and fruitful labor relations. Rest assured, no one is
more concerned with the future of the Met than the artists who comprise its backbone and
have worked their whole lives to be part of its tradition of excellence.

Finally, why are Peter Gelb’s claims that opera and its audience are dying finding so little
support among his peers? Why haven’t leaders of the world’s other leading opera houses
jumped on Peter Gelb’s bandwagon into the abyss? There is little doubt that the major
reasons for the Met’s current situation are a failed artistic vision and excessive spending
which has failed to bring any positive return. Chicago Lyric Opera and Houston Grand
Opera are thriving. The leading European opera houses have box offices that are selling
well over 90%. Surrounded by examples of success, why would an institution retain a
general manager whose sole mantra seems to be that his product is declining in
relevancy? Is this the tone the leader of the Met should have, or does the Met deserve a
positive, innovative visionary at its helm who can celebrate and mirror the
accomplishments of his peers? Is the Met truly poor, or is it just poorly managed?

Disclosure: All these numbers and figures are based on the Met’s information. Please see
our full presentation on the Local 802 website at http://www.local802afm.org/metorchestra/.