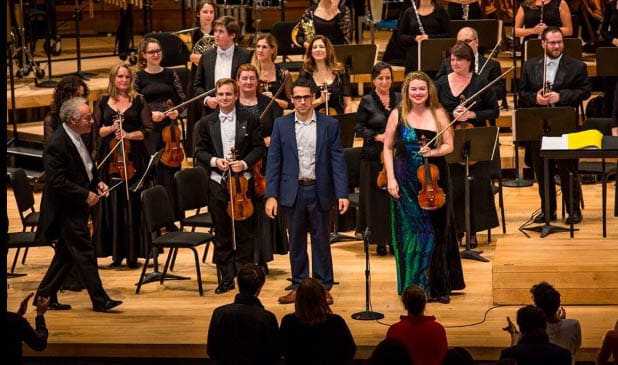 This Tuesday (July 26) at 7:30 PM ET, acclaimed violinist Lara St. John joins The Knights and conductor Eric Jacobsen to perform the NYC premiere of Nigunim – the work that earned Avner Dorman the 2018 Azrieli Prize for Jewish Music – at the Naumburg Bandshell in Central Park. Free to attend in person or to watch live on WQXR, this is a wonderful opportunity to hear this hauntingly beautiful work, whether for the first or tenth time. WQXR’s Paul Cavalconte hosts.

While Nigunim began as a violin sonata, it has reached incredible success with many performances over the past several years, especially after receiving the Azrieli Music Prize in its concerto form. The prize directly resulted in a recording of the work on Analekta and performances in Montréal, Warsaw, Prague and Toronto. Lara St. John just performed Nigunim with the Israel Sinfonietta and Nir Kabaretti in Beer Sheva on July 16, and last month, the Montreal Chamber Music Festival premiered a new sextet version of the work.

Dorman remarks, “This piece that started out as a violin sonata more than a decade ago has enjoyed a remarkable number of performances first as a sonata, then as a concerto and a sextet thanks to the support of the Azrieli Music Prizes. It’s very special and heartwarming for me as a composer.”

The sustained success of this work is a prime example of the quality of compositions discovered and celebrated by the biennial Azrieli Music Prizes (AMP). Listeners will want to be sure to tune into the livestream of the 2022 AMP Gala Concert on October 20 at 7:30 PM EDT to watch the premieres of the three 2022 laureates – Iman Habibi, Aharon Harlap, and Rita Ueda. The works will be vividly brought to life by the Orchestre Métropolitain led by Alexandre Bloch and soloists Sharon Azrieli (soprano), Sepideh Raissadat (voice and setar), Naomi Sato (shō), and Zhongxi Wu (suona/sheng).