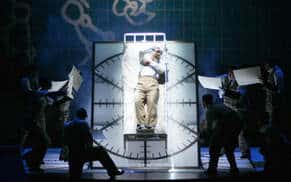 Recorded live at the Teatro Real Madrid in 2013, legendary composer Philip Glass’s opera The Perfect American, imagines the final months of the life of Walt Disney – the person who has, more than any other, influenced the current world of consumers. Children nowadays only see mice and ducks as Mickey Mouse or Donald Duck, thanks to the image invented for them by the Walt Disney factory.

In opposition to the world of happiness he devised, the existence of this perfect American was marked by an unhappy youth and a personality whose political attitudes and beliefs didn’t bear scrutiny.

The libretto, by Randy Wurlitzer, is based on a novel by Peter Stephan Jungk. It stars Christopher Purves, David Pittsinger, Donald Kaasch, Janis  Kelly and Marie McLaughlin Conducted by Dennis Russell Davies, who has conducted almost all the premieres of Glass’s operas, and directed by Phelim McDermott, The Perfect American is a penetrating look into the nightmare of a happy world.